I made this bread last week before the big moving weekend, so everyone would have something tasty and we wouldn’t have to get any dishes dirty. I found this recipe on Pinterest, it’s originally called “The cinnamon Amish bread alternative” I believe. I guess the Amish make a similar bread to this, but it takes hours to make. I was drawn to this recipe because of how simple the recipe was and that I had all the ingredients on hand, plus it just looked amazing! It smelled divine baking and I can definitely say it held up to its rave reviews! Everyone loved it and my husband even took a loaf into work and he said everyone gobbled it up there too! Definitely a keeper recipe, which is why it’s on here and I’m sharing it with you! 🙂
I don’t know if I’ve disclosed my relationship with butter… However, if I’ve never mentioned it, I am the butter queen! I put the stuff on everything! My husband makes fun of what I put it on and admittedly how much I use. I grew up eating butter on a lot of things, so it’s basically second nature to me. It has to be 100% real though, I don’t set foot near the fake stuff. Also nutritionists now believe that butter is significantly better for you than margarine because it is a much purer product and it’s not loaded down with a bunch of chemicals claiming to be “better for you”. When in doubt, I always levitate to the most natural products and this is definitely no exception. There are few things in this world better than a slice of homemade bread with a big ole pat of deliciousness on it, mmm…. Case in point, when you slice yourself up a piece of this bread, make sure you have a little bit of butter with your bread, or if you’re like me, bread with your butter 😉

Directions:
Grease two loaf pans, and preheat the oven to 350F. Cream together butter, 2 cups of sugar, and eggs. Add milk, flour, and baking soda. Next place half of the batter, (1/4 in each loaf pan), and sprinkle about 3/4 of your combined Cinnamon/sugar mixture between the two loaves. It just goes right on top of the batter once you’ve poured it into your pans. Add the remaining batter on top of your layer of cinnamon/sugar, and then sprinkle the rest of your mixture on top of your loaves. Swirl with a knife. Bake the loaves in your preheated oven for 45- 50 minutes or until they pass the “toothpick test”. Once removed from the oven, let the loaves cool 20 minutes before removing them from the pans. Enjoy!

P.S I was silly and didn’t take any pictures of the inside of the bread once I cut into it, but trust me, it was a beautiful sight! Here’s a couple of the loaves once I took them out of the pans though. 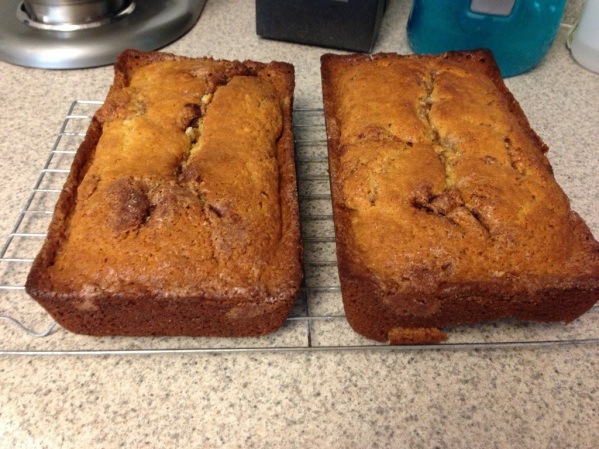 One thought on “Cinnamon Swirl Bread”